Free Stuff on Your Birthday

So I had a birthday. It was roughly a month ago, and it was pretty great. Is this post overdue? Well, maybe a little. A few things happened in the weeks that followed as well.

Anyways it turns out that you can get a lot of stuff for free on your birthday. So here’s the entire day crammed into 9 minutes where we find out how much we can really get.

If you stuck through the entire thing, then congrats – you’re amazing and I love you. This video holds the record for the longest production we’ve made so far, and also for the total amount of effort that went into planning and organization. Not only did it start probably half a year prior with signing up for various customer clubs and such, but the few weeks leading up to the day were hectic as well.

Most of the locations that we visited just to shoot some fun scenes in (Laser Dome, 6pack, E-Exit) were contacted well before hand. Surprisingly, most places were incredibly receptive to the idea of being in the video. I love all of those places too.

So we started at roughly 2AM for some breakfast (shooting the intro scene), and then ran on about 3 hours of sleep for the entire day – They really need to schedule gold medal hockey games at better times. But regardless, the day was a hell of an adventure and we managed to go through our entire list. Then I edited a bunch. 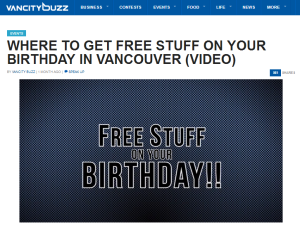 Our first media mention! I had contacted Vancity Buzz after posting the video, and they responded quite enthusiastically. This was incredibly exciting, and it appeared to fare pretty well. Thanks to them we were able to share our video with a lot of locals, and hopefully help them out with some birthday planning. Thanks Vancity Buzz!

But that wasn’t the end of it.

A little while later, I share the video again with Reddit, specifically the Vancouver subreddit. It did fairly well there too. In fact, this helped it catch the attention of another party: 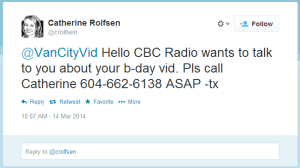 So of course we contact them. They wanted us to wake up super early the following Monday morning so that we could do this: 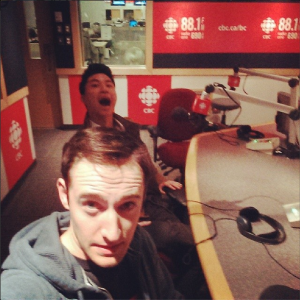 It was awesome – a radio interview is totally worth getting up for! Thanks CBC!

So anyways, we had a hell of a lot of fun making this video, and it resulted in a lot of great attention. We can only hope that some of our future work is equally well received. Big thanks to everyone.